Chauncey Roach began playing the clarinet at the age of nine in his home town of Yukon, Oklahoma, adding saxophone and flute soon thereafter. Highlights of his early musical successes include First Chair Clarinet of Oklahoma All-State Band and a variety of Regional Honor Bands; in college Chauncey was Principal Clarinet in the Orchestra, the Wind Ensemble, and the Concert Band. He played Lead Alto Sax in the Jazz Ensemble and performed in a variety of chamber groups, as well as opera and musical pit orchestras. In 1982 he was selected for the Walt Disney Epcot Center All-American College Marching Band.

In 1985 he earned his Bachelor’s degree in Music Education from the University of Oklahoma, where he studied clarinet with the late Dr. David Etheridge. He spent the following year pursuing a Master of Music in Clarinet Performance, but left his formal studies after winning an audition for the Air Force Band of the West in Northern California. He spent six years travelling the Western United States with the band, performing hundreds of concerts, shows, and ceremonies in the Concert Band, The Commanders Jazz Ensemble, the Ceremonial Band. After six years he separated from the Air Force to pursue a career in Nursing.

Chauncey received his Bachelor of Science in Nursing from University of Central Oklahoma and his Master of Nursing Administration from California State University. He is the Chief of Surgical Nursing at the Southern Arizona VA Health Care System.

Chauncey has been a member of COT since 2014, the same year he and his partner, David, finally moved into their Tucson home from San Francisco. They both love the community of Tucson and their great Sam Hughes neighbors. They enjoy hiking in the beautiful southwest, spending time with family and friends, and walking their adorable pooch, Riley, around the neighborhood. 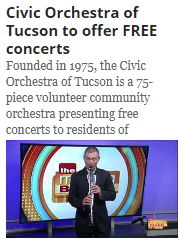 Click to watch our segment on KGUN9’s “The Morning Blend,” which aired on Friday October 12, 2018. Chauncey Roach plays sections of the Mozart Clarinet Concerto, which he will perform at our concerts on October 13 and 14.