The Civic Orchestra of Tucson (COT) is now in its 46th season of presenting free concerts throughout the Tucson area.

The Civic Orchestra of Tucson was founded in the spring of 1975 by George Schwartz so that he and his friends could play classical music together. Drawing largely from his private library, the group presented standard small orchestra literature from Baroque to light opera. The orchestra was incorporated on October 1, 1976, and received its 501(c)(3) non-profit designation in December 1976.

The orchestra’s first concert was held on February 22, 1976.

From the Tucson Daily Citizen on Thursday, Friday, February 19, 1976:

CIVIC ORCHESTRA DEBUTS
In plans and rehearsals for a year, the 60-member Civic Orchestra of Tucson, directed by George Schwartz, will debut Sunday with a free concert in the Rincon High School auditorium at 8 p.m. The program will include works spanning the years from George Handel and Johann Strauss to Aaron Copeland [sic] and Leroy Anderson.

Concert program of its first performance [perhaps a piece by Leroy Anderson was an encore]:

As reported in the AZ Daily Star: Sunday, Nov. 18, 1979:
Herschel Kreloff, new conductor of the Civic Orchestra of Tucson, will take his first bow with that group today in a free concert at the Armory Park Senior Citizens Center. The 4:30 p.m. concert is sponsored by the city. Kreloff, who teaches strings for Tucson Unified School District, says he “walked into the position” a couple months ago when then-conductor George Schwartz, who founded the Civic Orchestra three years ago, resigned. Kreloff has played trumpet for the Tucson and Phoenix symphonies, but had not been associated with the Civic Orchestra before he was contacted as a possible replacement for Schwartz. The concert will open with a Toccata by Frescobaldi, orchestrated by Hans Kindler; Schubert’s Symphony No. 5 in B-flat; the overture to “The Egyptian” by Luigini; Offenbach’s “Barcarolle” from “Tales of Hoffman” and Mendelssohn’s “Ruy Bias” overture.

As a performer, Dr. Kreloff played trumpet in both the Phoenix and Tucson Symphony Orchestras, as well as numerous pit orchestras, stage bands, and dance bands. He served as assistant conductor of the Tucson Symphony Orchestra under Gregory Millar. He taught band and orchestra at every grade level in public schools in Phoenix and Tucson and was also Music Director of the Tucson Concert Band for 15 years.

Dr. Kreloff was awarded The Four Way Test Award in recognition of “Service Above Self,” given on June 15, 2011, by The Rotary Club of Tucson, Arizona. On April 12, 2015, Dr. Kreloff was inducted into the Tucson Musicians Museum. Read more.

After leading his final concert on December 3, 2017, he asked conductors Charles Bontrager and Chris Tackett to conduct concerts for the rest of the season. He passed away peacefully on April 25, 2018, just days before his 87th birthday. 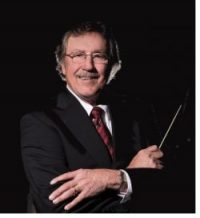 After Charles Bontrager led the orchestra in rehearsals and concerts for two months, in March 2018, the Board of Directors unanimously appointed Mr. Bontrager to be the next—and only the third—Music Director of the orchestra. Read more about Mr. Bontrager.

Mr. Bontrager retired in the spring of 2022, at which time the Board appointed Keun Oh as its next Music Director. Read more about Dr. Oh.

The two conductors shared the podium at the March 2022 concert.

To date, the Civic Orchestra of Tucson has performed over 1,000 works by 155 composers in over 275 concerts, with 4 world premieres, 2 Arizona premieres, and over 100 performances by winners of its Young Artists’ Competition.

The Civic Orchestra of Tucson features professional guest artists as well as soloists from the orchestra at its performances. In 2005, and again in 2009 COT participated in Ford Made in America—a consortium of 65 orchestras coordinated by the League of American Orchestras and Meet the Composer. Our effort culminated in the Arizona premiere of Joan Tower’s “Made in America,” and Joseph Schwantner’s “Chasing Light.” Tower’s composition went on to win a classical Grammy, and the entire Ford Made in America program was given the League’s Golden Baton award for “vision and leadership which…(brought) vibrant energy of new orchestral music to communities in all 50 states.”

Many thanks to past COT historians Mary Kundrat, Margo Sullivan, Patricia Thoresen, Elaine Walter, and current historian Martha Eby, along with countless members who have provided memorabilia for the scrapbooks: programs, photographs, newspaper clippings, and much more. What a well-documented history we have!