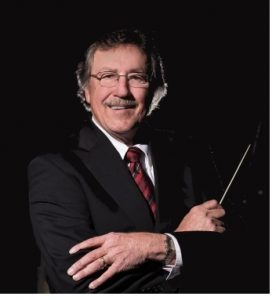 Charles Bontrager retired from the post of Assistant Director of Orchestral Activities at the University of Arizona, a position he accepted following his retirement from the world of adult music-making after nearly thirty years as a conductor of symphony and opera.

Bontrager has held numerous positions in the United States including the music directorships of orchestras in Ohio, Kentucky, Washington, and Missouri, along with opera companies in Missouri and Arkansas. As guest conductor, he has led symphony orchestras in many major American cities as well as in Brazil, Italy, the Czech Republic, and Canada. He has also directed opera companies in Missouri, Arkansas, Louisiana, Ohio, New York, Colorado, Washington, Italy, and the National Academic Opera Theater of Minsk, Belarus.

He has collaborated in performance with many leading instrumental artists of our day including Misha Dichter, Midori, Joshua Bell, Barry Tuckwell, and Richard Stoltzman. Among the noted vocal artists with whom he has shared the stage are John Alexander, William Walker, Evelyn Lear, Wendy White, and Thomas Stewart. Bontrager has also appeared with numerous “pops” artists including The Canadian Brass, Ray Charles, Roy Clark, Benny Goodman, and Peter Schickele.

The inspiration of having worked with world-class teachers including Leonard Bernstein, James Levine, Thomas Schippers, and Leonard Slatkin has dramatically shaped Bontrager’s life and work, leading him toward a high commitment to teaching. To that end he has taught and conducted at the Universities of Indiana, Colorado, Illinois, Iowa, Arizona, Cincinnati, and the Shepherd School of Music at Rice University. Bontrager also served for a number of years on the board of directors and executive committee of the Conductors’ Guild, Inc., an international service organization devoted to educational and artistic opportunities for conductors worldwide.

His educational background includes bachelor and master’s degrees in music education from Butler University, as well as a DMA/ABD in Orchestral and Opera Conducting from the University of Cincinnati.

On a more personal note, Charles Bontrager and his wife, Jan, have been Tucson residents since 2001 and greatly enjoy their three granddaughters, also Tucson residents. Their immediate family also includes Charles’s son, a professional violinist/violist living in Chicago, and his daughter, who owns a pet sitting and boarding business in Seattle. His stepdaughter, and mom to the granddaughters, has been an art educator in Tucson, and dad is a firefighter. Now in retirement and clad with silver sneakers, Charles and Jan are creatively engaged in their passions for boating, golf, travel, fine dining, and other leisure pursuits including an “up north” cabin in the Minnesota woods (summers only, thank you!).

Maestro Bontrager retired as Music Director of the Civic Orchestra of Tucson in May 2022.

Read the 10/8/2018 story about Charles, written by Cathalena E. Burch and posted on Tucson.com.