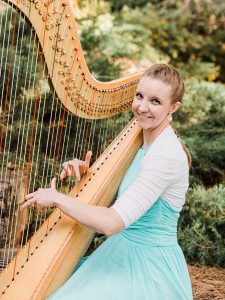 Denielle Eliason began studying the harp at age 11 with Dr. Cathy Clayton in her hometown of Salt Lake City, Utah, fulfilling her grandmother’s wish that someone in the family learn to play the harp. Two and a half years later Denielle performed in her first master class with the world-renowned classical and jazz harpist Dr. Carrol McLaughlin. In the summer of 2003 Denielle was part of the inaugural class of students to attend the Arizona Harp Experience, a weeklong intensive study course taught by Dr. McLaughlin, Dr. Clayton, and harpists from the University of Arizona and the University of Utah. She attended the Arizona Harp Experience every year thereafter, and from 2006 through 2010 served as a Teaching Assistant for the course.

As a Presser Scholar, Denielle graduated cum laude with a Bachelor of Music degree in Harp Performance from the University of Arizona in 2010, where she was recognized as the School of Music’s Outstanding Senior. She received her Master of Music degree from the University of Arizona in 2014. Both degrees earned under the tutelage and mentorship of Dr. Carrol McLaughlin provided Denielle the opportunity to perform as a member of the world’s largest touring harp ensemble, HarpFusion. As an integral member of HarpFusion, Denielle arranged numerous pieces for harp ensemble, helped produce and record two CDs, was instrumental in the behind-the-scenes management of the group, and toured nationally and internationally.

She has performed throughout the southwest United States in San Diego, California; at Disneyland in Anaheim, California; at the Utah Governor’s mansion, Libby-Gardner Concert Hall and Abravanel Hall in Salt Lake City, Utah; at the 2007 National Flute Association convention in Albuquerque, New Mexico, with the University of Arizona flute ensemble Flutefinity under the direction of Dr. Brian Luce, premiering his composition for flute and harp “Mogollon Memories”; and in 2012 performed G.F. Handel’s Concerto for Harp with the Southern Arizona Symphony Orchestra. She has performed around the world in the Netherlands, Belgium, Liechtenstein, Austria, at the 4th annual Rio Harp Festival in Rio de Janeiro, Brazil, and at the 2010 World Expo in Shanghai, China. Since 2009 Denielle has served as the Principal Harpist with the Sierra Vista Symphony Orchestra and the Civic Orchestra of Tucson.